Campion Hall’s remarkable art collections are mostly due to the inspiration of one man, Fr Martin D’Arcy (1888-1976), who was the Master of the Hall for a long period in the mid-twentieth century. D’Arcy has been described as ‘perhaps England's foremost Catholic public intellectual from the 1930s until his death’. He was a friend to many of the leading writers of the English twentieth century: Evelyn Waugh, Muriel Spark, Edith Sitwell, Graham Greene.

He was also a man of acute sensitivity to the visual arts. He was educated at Stonyhurst College in Lancashire, which inherited the collections formed in exile by the English Jesuits from the late sixteenth century onwards. As a schoolboy, D’Arcy saw precious items that had been saved during the turbulence of the Reformation period taken abroad, including vestments from the chapel of Henry VII, and a rich collection of works of art reflecting the worldwide activities of the Society of Jesus. These collections educated his eye and nourished his imagination, and also impressed him with the power of art to communicate, inspire and move people to devotion.

When he became Master of Campion Hall, D’Arcy resolved to fill the hall with art whose primary purpose was (and is) to promote dialogue. It is also a collection, which aimed to communicate something of what it meant to be English, Catholic, and a Jesuit. So there are portraits of the Catholic Stuarts, one of the finest assemblies of baroque religious art in England, and works of art related to the activities of the Jesuits worldwide, from Ibero-America to the Far East. 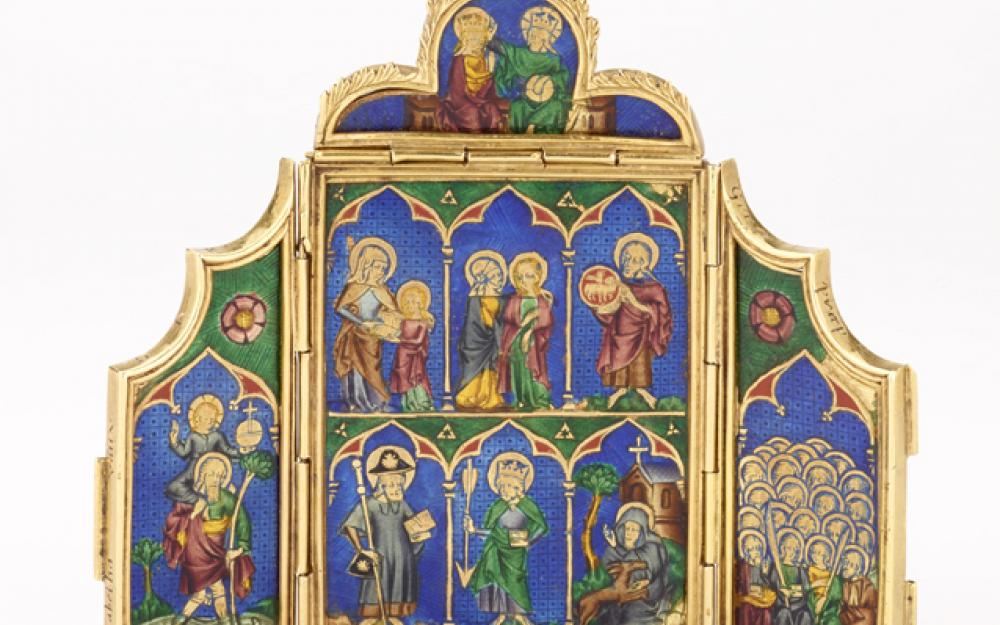 One of the first objects that excited D’Arcy was a very remarkable survivor, a tiny, folding triptych of gold and translucent enamel, made in England between 1350 and 1370 as a luxury devotional object, and owned by Mary, Queen of Scots. It came into the hands of the Dukes of Bavaria before 1617, and in 1932, Prince Rupert of Bavaria put it on the market. D’Arcy was not able to buy it, but after a remarkable series of wartime adventures, this remarkable work of English medieval art was rescued and given to him in 1952. It is on long loan to the Ashmolean Museum and is displayed there.

Also on long loan to the Ashmolean is the most distinguished painting in the Campion Hall collection, the 1540 Crucifixion painted by Marcello Venusti after designs by his close associate Michelangelo. This painting on panel, bought by D’Arcy at the Ashburnam sale in 1953, is very closely based on a drawing by Michelangelo, which probably dates from the late 1530s, and is now in the British Museum. Without overstating its claims, it is a panel painting from Michelangelo’s inner circle at a most interesting late stage in the Master’s career. Sir Kenneth Clark (Lord Clark), then director of the National Gallery, dropped out of the bidding once he knew that D’Arcy wanted it: he wrote subsequently, ‘we [i.e. the National Gallery] would much rather it went to you, for its purpose is to inspire devotion’ 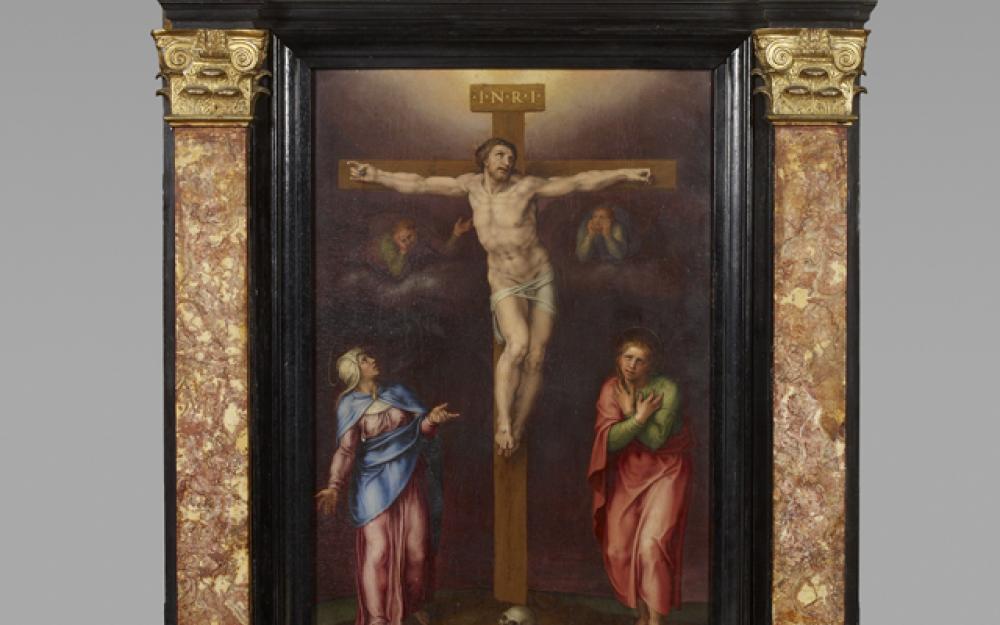 This is one of the most distinguished early-modern paintings in the Campion collections, but there are many other fine works of southern European art from the Mannerist and Baroque periods, including canvases by Palma il Vecchio and Guido Reni, as well as an exceptional sculptural group in polychromed wood, almost certainly originating in Seville in the early seventeenth century, showing St Ignatius and his Companions.

One kind of object which particularly interested D’Arcy was liturgical vestments. These were often obtainable in the 1930s, because precious antique fabrics had come into fashion as part of neo-baroque schemes of interior decoration. As Evelyn Waugh, a close friend of D’Arcy’s, wrote, ‘gaudy objects, bought or looted from foreign convents … appeared profusely in the show-rooms of fashionable, secular decorators.’ D’Arcy went hunting in antique shops, and attracted the sympathetic interest of a number of dealers who felt that an ancient chasuble was more fittingly sold to a priest than to an interior designer. He was able to amass a considerable collection of vestments, which include medieval, Oriental, and baroque examples. 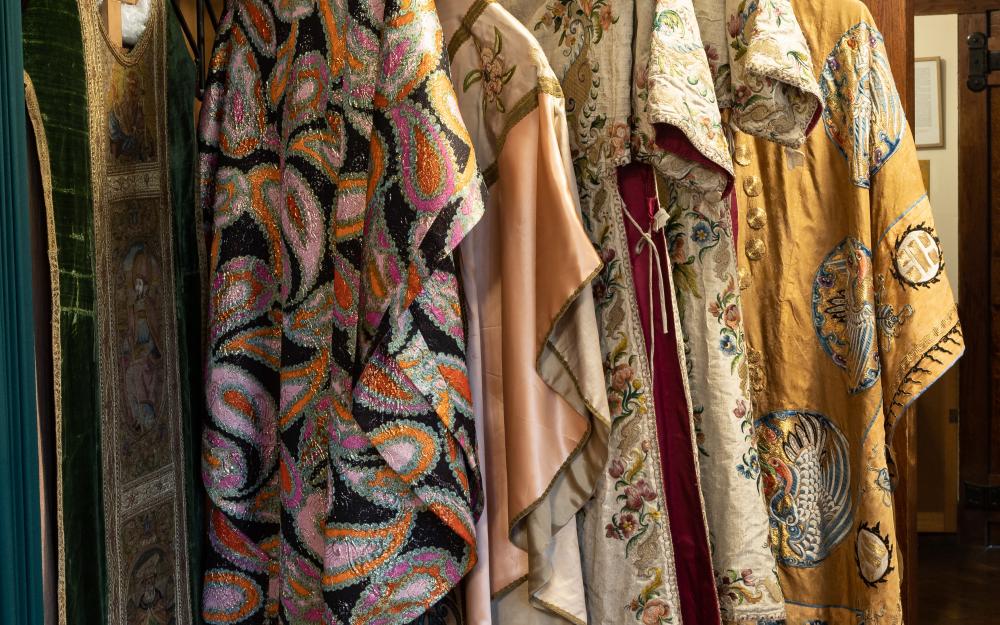 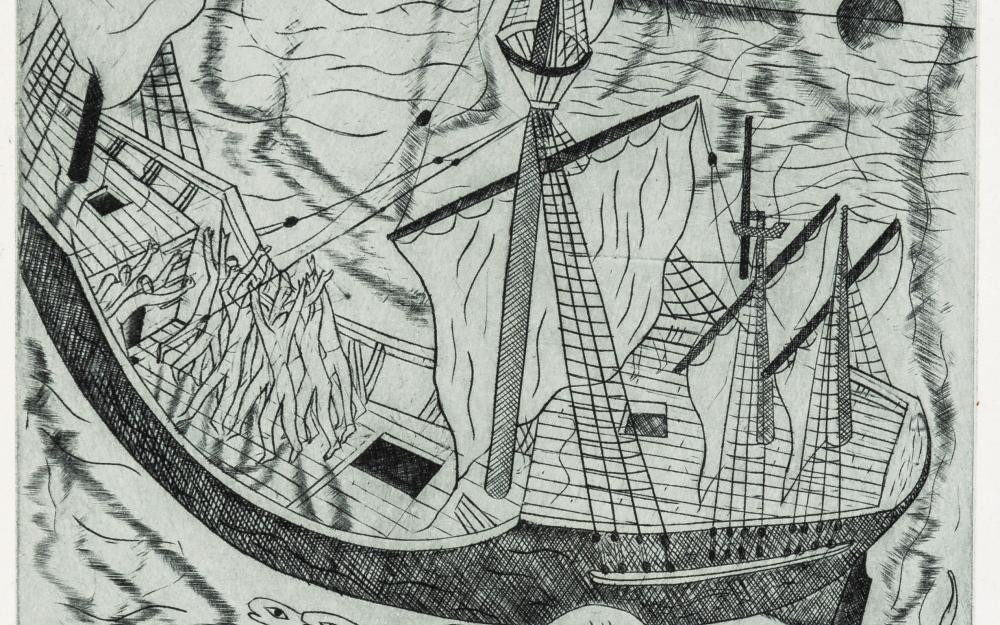 In his collecting of religious paintings and sculpture, his numerous friends were happy to help him. Michael Holroyd, Fellow in Ancient History at Brasenose, gave him a picture by Jacopo Bassano, and other donors included the major dealers John and Gertrude Hunt who gave a haunting Scandinavian crucifix. Sir John Rothenstein, Director of the Tate also advised D’Arcy. His resources were limited, but he was much liked by connoisseurs and by the more scholarly auctioneers and dealers.  He was lucky to be collecting religious art at a time when such pictures were not greatly valued, and the hall has many fine examples. D’Arcy also collected contemporary works given by (mostly Catholic) friends who included Eric Gill, David Jones, Augustus John, and Sir Frank Brangwyn.

One major purpose of the Collection was to start conversations and, at a time when there was considerable mutual suspicion between religious confessions, to introduce a mostly Anglican university to Catholic traditions. Additionally, D’Arcy said, ‘Many reasons have impelled me in this pursuit. One is that the Jesuits have so often been denigrated – at times quite unfairly – for their lack of taste… beyond these considerations is that of the vast importance beauty does and should play in the Catholic faith… Art is man’s contrivance of making real to himself what reason leaves in the abstract’.  The writer and actor Robert Speaight wrote of D’Arcy,  ‘He thought of Campion Hall as a shrine of Christian civilisation’.

Campion Hall still makes occasional acquisitions, which relate directly to one of the existing themes of the collection, in particular, Jesuit and Catholic world art, and English Catholic art of the mid twentieth century. 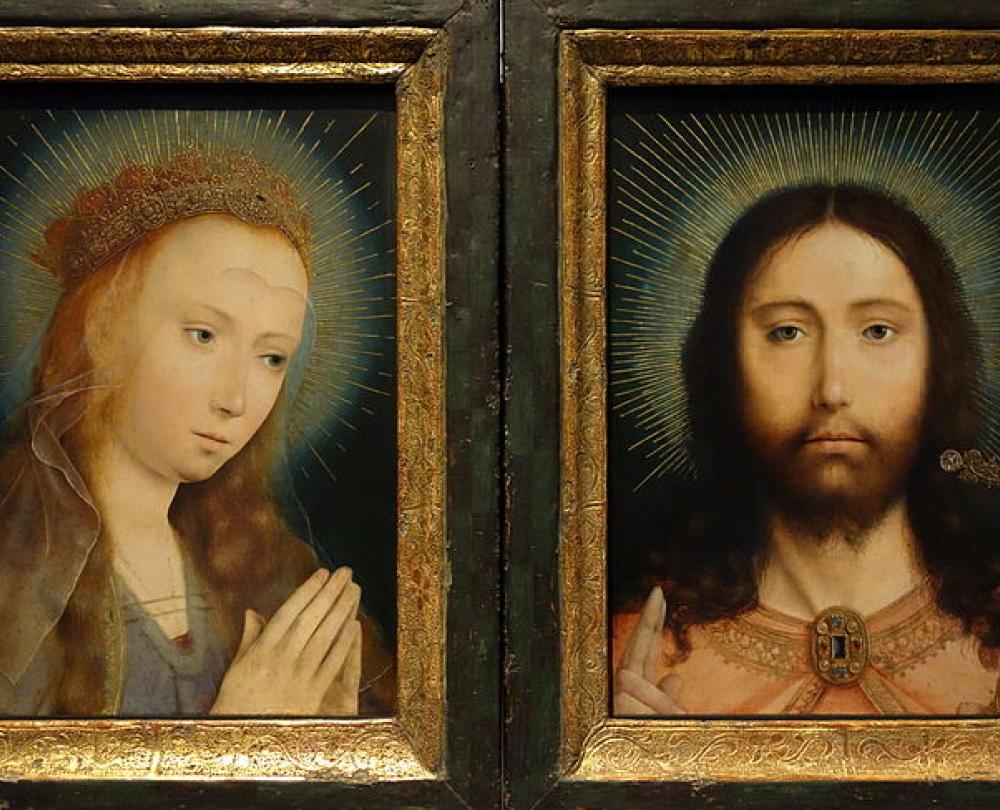 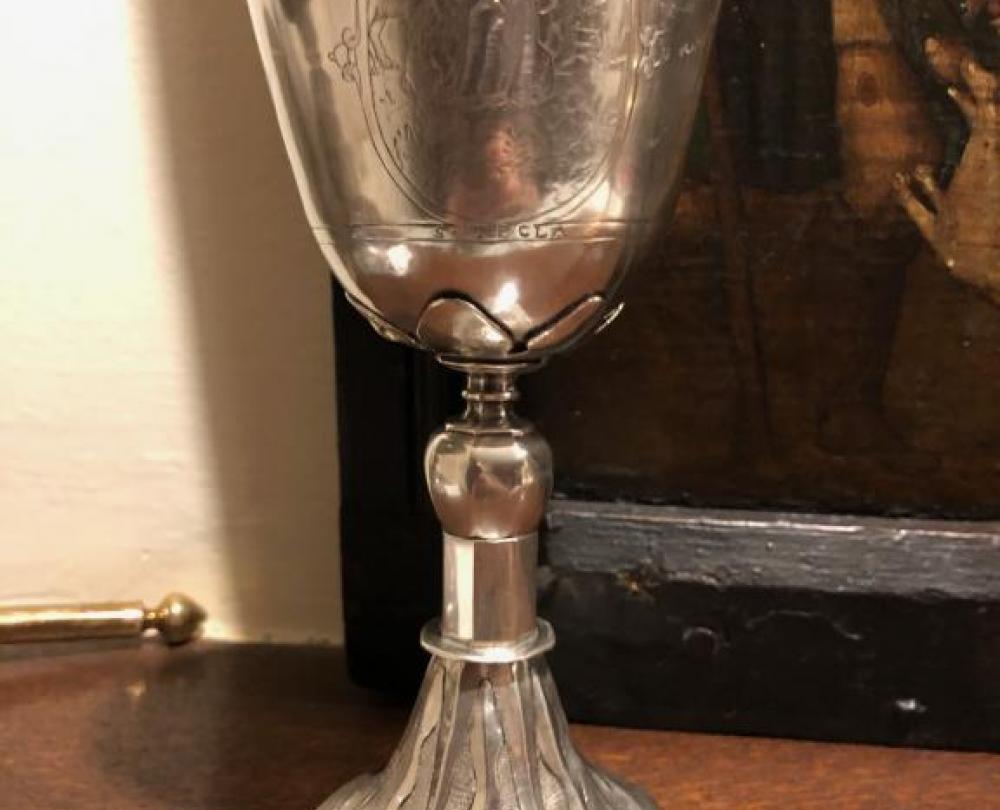 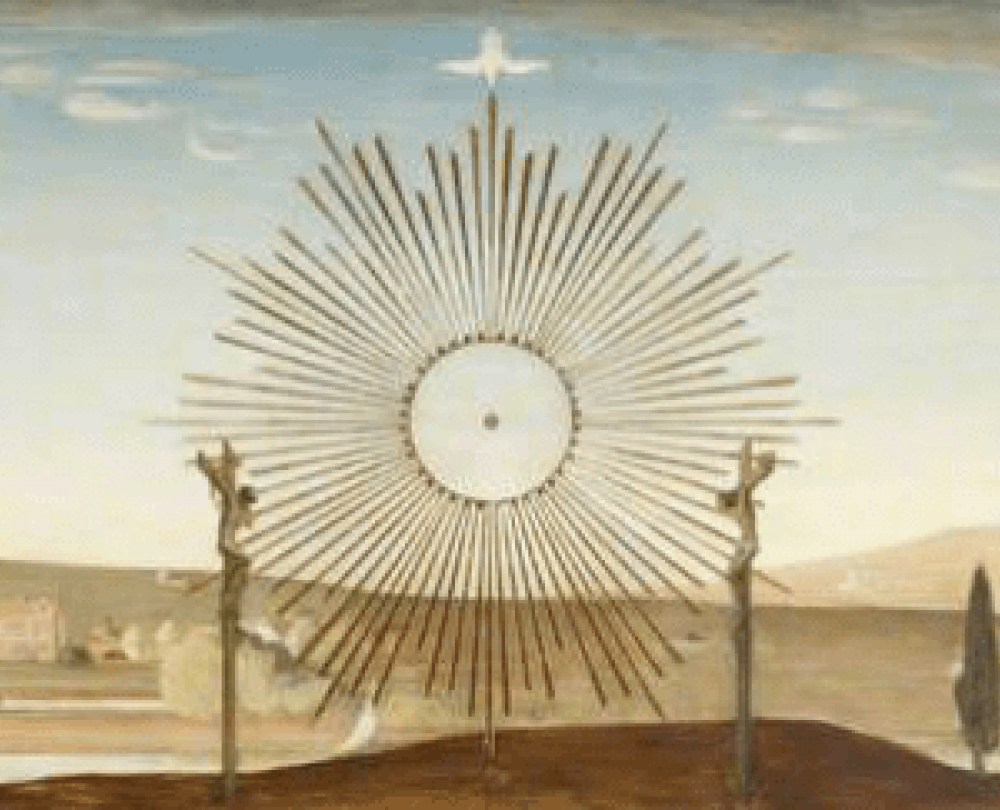