I am Senior Research Fellow in Byzantine Cultural History at Campion Hall. In addition to Landscape Archaeology, I am interested in ecclesiastical and monastic history and my research involves applying both textual analysis and material culture together to reach conclusions.

I think I can safely say that the greatest influence on my life has been poetry. My love for Seamus Heaney and Yeats indirectly led me to study Greek – in particular Byzantine Greek – at Queen’s University, Belfast. Through a postgraduate scholarship to study Byzantine Hagiography at Athens University, I came into contact with the physical remains of medieval Greece, developing an interest in Byzantine archaeology. This eventually led to my working for prolonged periods in Greece, Cyprus, and Turkey, taking part in archaeological fieldwork in collaboration with scholars of many nationalities.

Training in Byzantine archaeology involved acquiring a range of skills including accurate technical drawing, careful observation and record keeping, but most of all learning to lead. Being in charge of a team of men in countries where men usually do the managing was a big challenge, compounded by having to convey that I was truly in control in a language other than English. Understanding how to gain the respect of a team is a useful life skill to acquire, and working on an excavation is perhaps one of the most practical ways to achieve this.

Many seasons of fieldwork systematically walking across rural terrains and surveying for evidence of their exploitation through the ages led to a command of landscape archaeology, a sister discipline to excavation. Archaeological publications followed, while at the same time I began drawing on hagiography to write about saints and monasticism, often in tandem. For instance, I was able to demonstrate that the hagiography of an eleventh-century ascetic in Greece that protested loudly the pious poverty of his religious foundation was at odds with its twenty-plus sumptuous monasteries.

If I had read of such an event in a hagiography I would have attributed it as a topos of the genre. But experiencing the miraculous extinction of a devastating fire that had killed a number of people at the walls of a church on the feast day of its dedicatee changed my perception of hagiography.

Archaeology is not some esoteric pursuit completely removed from everyday life. Its logistics demand a practicality second to none, as I found when arriving in a remote village in the Turkish mountains with a team of undergraduates to a pre-booked newly-completed house without fittings or fixtures, lacking both taps and coverings on electric sockets and light switches. We laid newspapers on the dusty cement floor under our sleeping bags. On this house’s great south-facing wall every morning we suspended a long pole threaded with supermarket bags filled with water, one for each member of the team, so that we could wash in warm water in the evening instead of with the icy cold liquid that gushed straight out of the mountain. It was necessary to learn to contend with wild life: extracting a 10 cm long millipede from inside the leg of my jeans; being enclosed in a loo cubicle with a snake that was bigger than I was; getting chased by wild dogs; and outrunning an angry swarm of hornets with a rucksack of pottery on my back.

Our team once spent two days fighting an enormous fire around our village base in southern Greece. The patron saint of the village was Agia Kyriaki and, just as everyone was preparing to evacuate with the fire approaching her eponymous church on the edge of the village, the wind suddenly changed, the fire went back on itself and was extinguished within an hour. This also happened to be the feast day of Agia Kyriaki – 7th July – and the party of all parties followed. It was the first and only time I’ve ever been to a social occasion wearing clothes that hadn’t been changed for days and unaware of the black smudges on my face. If I had read of such an event in a hagiography I would have attributed it as a topos of the genre. But experiencing the miraculous extinction of a devastating fire that had killed a number of people at the walls of a church on the feast day of its dedicatee changed my perception of hagiography. 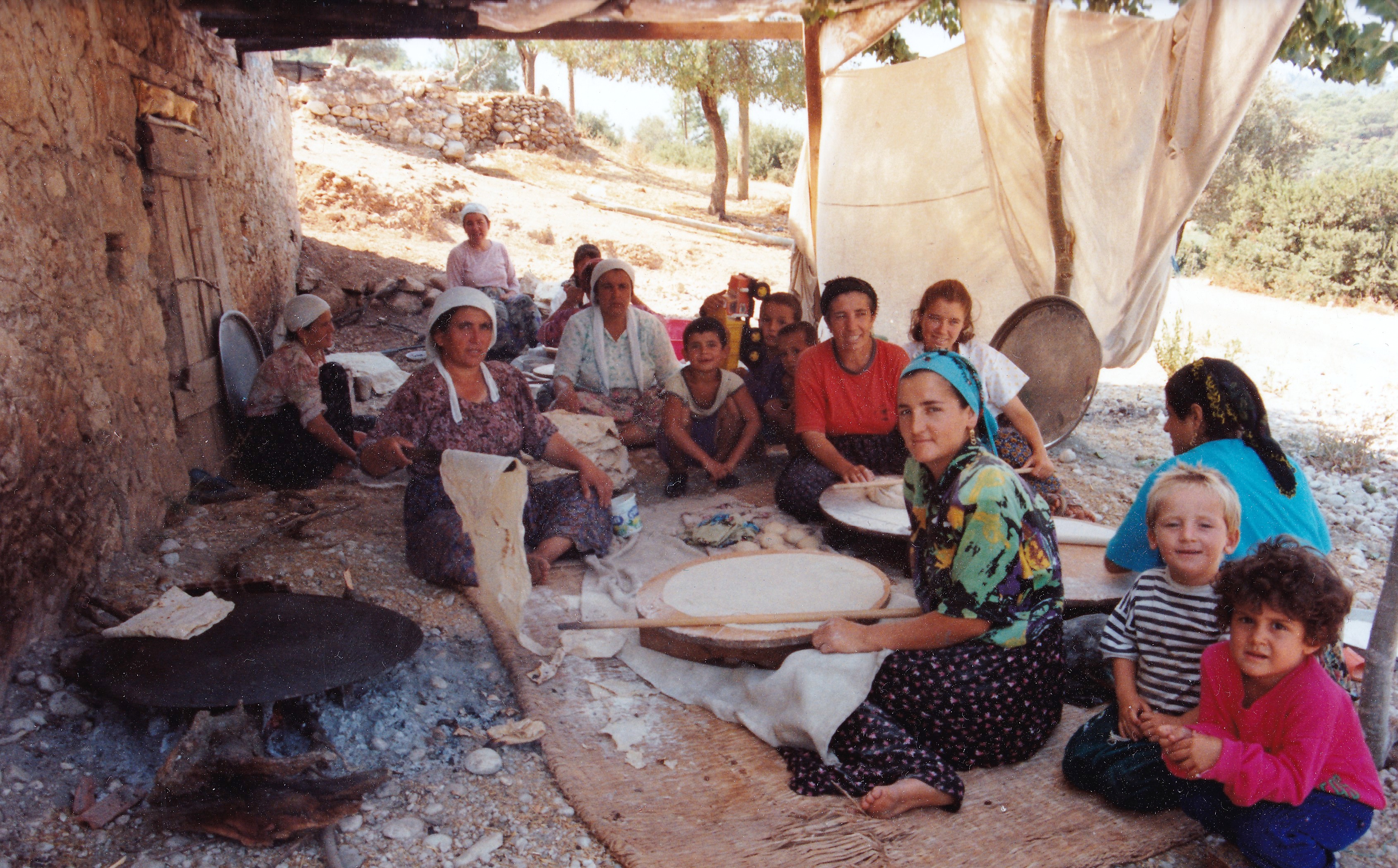 In the Lycian highlands, south-western Turkey. Women gathered to make supplies of flat breads for their families while children play.

My various publications in Byzantine archaeology have focussed on the countries that form the modern Balkans with Russia and Crimea, as well as the Mediterranean. I have also drawn on modern observations to understand the past and ultimately our human condition. At a wedding in rural Turkey the bride’s family hosted over a hundred people in a field where we sat on the hard ground in the hot sun. We listened to hired travelling musicians play their wailing pipe music while a man went round with a ceramic container and a glass – the only glass – offering us drinks of water. Such festivities must have happened in the same manner for millennia. The only nod to our time was the bride’s wedding dress. On another occasion in the Turkish countryside I once encountered a gathering of women making large numbers of flat breads – wraps to us – and cooking them with hot stones and a sheet of metal after having stretched them with sticks. This was another custom that must have been very ancient, demonstrating the solidarity of women in a male-dominated world.

Most recently I have become a Senior Research Fellow at Campion Hall and rediscovered poetry. Just as ignorant as when I first took up Byzantine Studies, I did not know until arriving here that another of the great heroes of my teens, Gerard Manley Hopkins, a Jesuit, was associated with the Hall. As I sit in the library where he once worked, researching my latest work on the excavation of a ninth-century monastery in Constantinople that served as the burial place of its founder, Patriarch Ignatios, it is clear I have truly sailed the seas and come to the Holy City of Byzantium.