Visitors to Campion Hall have all seen and admired the glorious panels by Charles Mahoney in the Lady Chapel.  The wall paintings are unique and exquisitely executed depicting the life of Our Blessed Lady, with Mahoney’s great love of colour and horticulture on full display.

Some years ago, the Hall put out a call for financial help to restore the Mahoney panels from which paint was flaking due to water ingress. Many people kindly and generously supported this call, and much work has been done to resolve the problem.  But now a further four months’ survey is underway to fully evaluate the continuing degeneration of vulnerable paintwork. Although the water ingress has been partially reduced by external repairs, the paint layer remains highly unstable, particularly in certain key locations (areas where repeated damage has occurred).

We are now asking for your further support as we investigate more deeply into the water ingress.  It appears to be coming from a meeting of drains – sufficient until heavy rain and the monsoon-like weather to which we are occasionally, but increasingly, subjected sends a deluge into a small space and creates overspill. Lutyens’ design of drains makes them inaccessible without major work and so we are looking at a costly project to save these paintings. We hope you agree that preserving and protecting the Hall’s impressive heritage is crucial and any contribution would be invaluable to further this aim.

Below is an article that Fr Jack Mahoney SJ wrote about the Lady Chapel, which is a fascinating read.

It is a traditional feature of Catholic churches to dedicate a side chapel in honour of Mary, the mother of Jesus. When Martin D’Arcy, as the recently appointed Master of Campion Hall, was planning the new building of the Hall in Brewer Street, he naturally wished to make something special of its Lady Chapel. He was enabled financially to do this through the benevolence of his close friend, Evelyn Waugh, who had recently completed writing his life of Edmund Campion and who now agreed to donate the royalties from the sales of the book to finance the painting of a set of Lady Chapel murals.

D’Arcy first invited the celebrated artist Stanley Spencer to consider taking on the Lady Chapel project, but Spencer proved himself eccentric and unpredictable. D'Arcy’s friend, Sir John Rothenstein, Director of the Tate Gallery, recommended a promising young teacher at the Royal College of Art, Charles Mahoney (1903-1968), who already had several murals to his credit. (These were later destroyed during the Second World War). Mahoney enthusiastically accepted the commission, and his working relationship with Campion Hall would continue for ten years, resulting in a set of richly coloured and detailed murals portraying the life of Our Blessed Lady which constitutes one of the most splendid and engaging treasures in Campion Hall.

Not a Catholic, Mahoney was thoroughly instructed in the details of Our Lady’s life and traditional Marian devotion, and the Lady Chapel narrates the events and providential role of Mary’s life in three major panels along with the two altar and sacristy walls, and all in the setting of a richly flowered vaulted ceiling. The artist achieves both contemporary relevance and artistic immediacy by dressing participants in everyday clothing and including portraits of some members of the Campion Hall community.

The dominating panel (shown in the header image) shows Mary crowned as Queen of Mercy surrounded by a garland of flowers and angels and spreading her protective cloak over four kneeling child-sized suppliants: a workman, a student, a uniformed soldier (it was wartime) and a clergyman, his friend the Jesuit Father Vincent Turner. The other two panels continue the theme of the year’s seasons by portraying, first, a winter night Nativity scene (shown below), with mundane shepherds replacing an earlier setting with kings; and then a summer-reflecting canopied Coronation of Our Lady by her risen Son (shown below) when she was assumed into heaven by the accompanying angels. 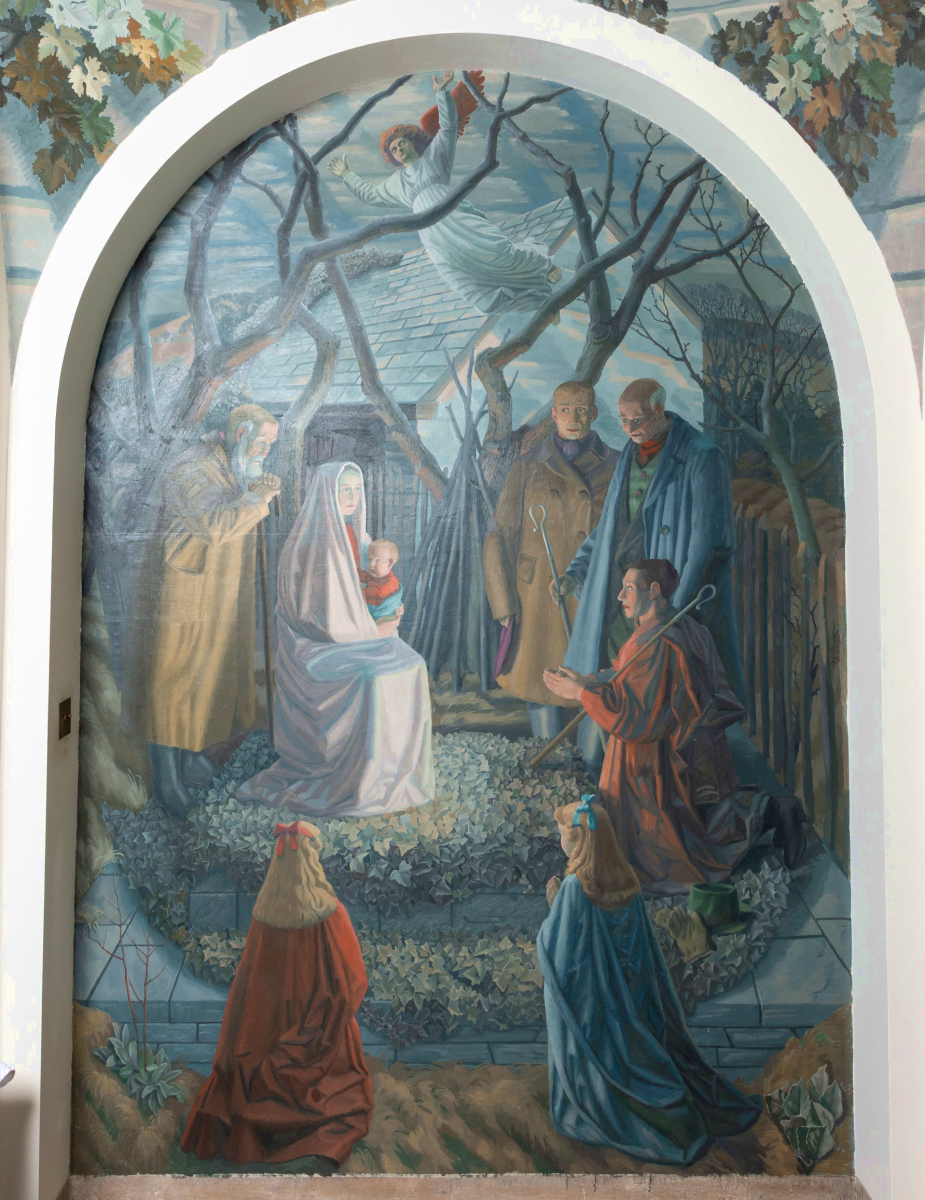 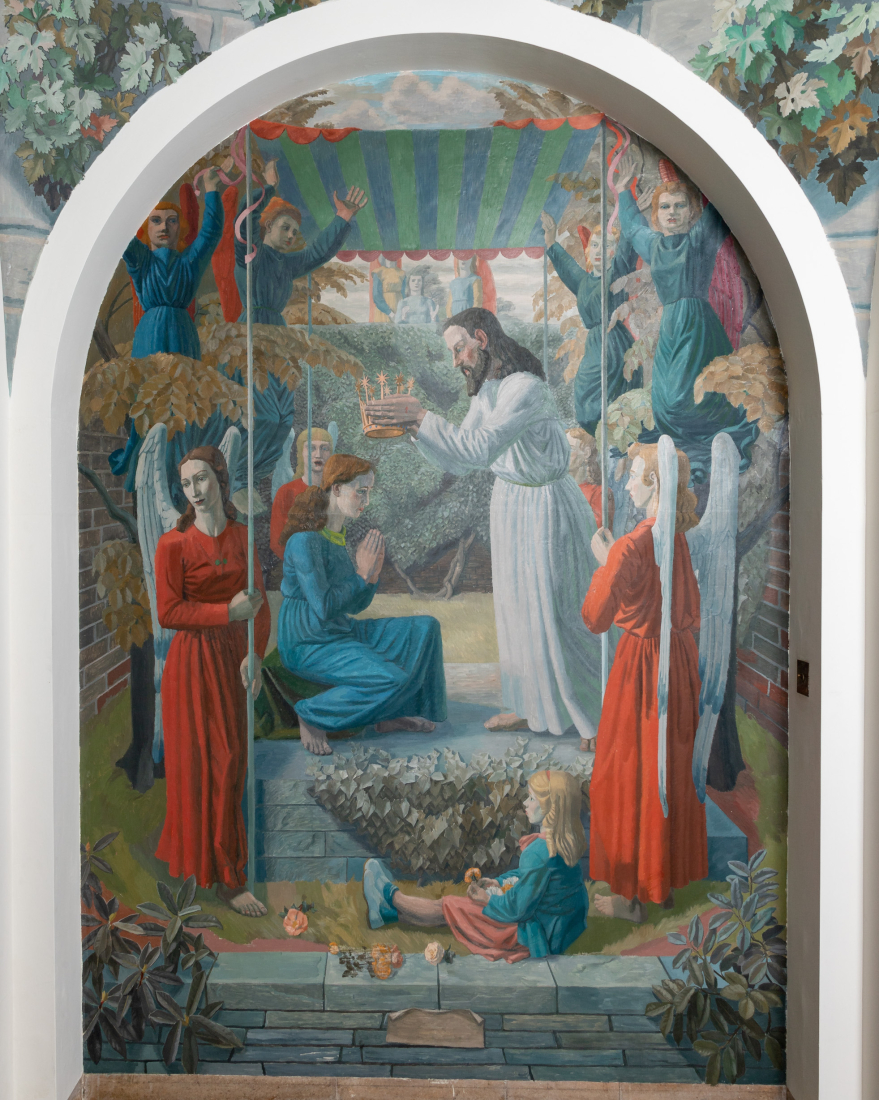 The wall of the chapel which contains a doorway into the sacristy (shown below) presented the artist with a challenge. Lutyens had designed the large elaborate door to fit in with his systematic use of wood throughout the Hall. Mahoney incorporated the doorway into his work by placing at the top the scene of the Holy Family’s Flight into Egypt, with two panels on either side of the door portraying several other Marian events: the traditionally wondrous birth of Mary to elderly parents; her Visitation to her pregnant cousin, Elizabeth; her betrothal to Joseph, preferred to the other apocryphal suitors; and the unfinished Dormition, or ‘falling asleep’, of Mary, the term traditionally applied to the completing of her earthly life. 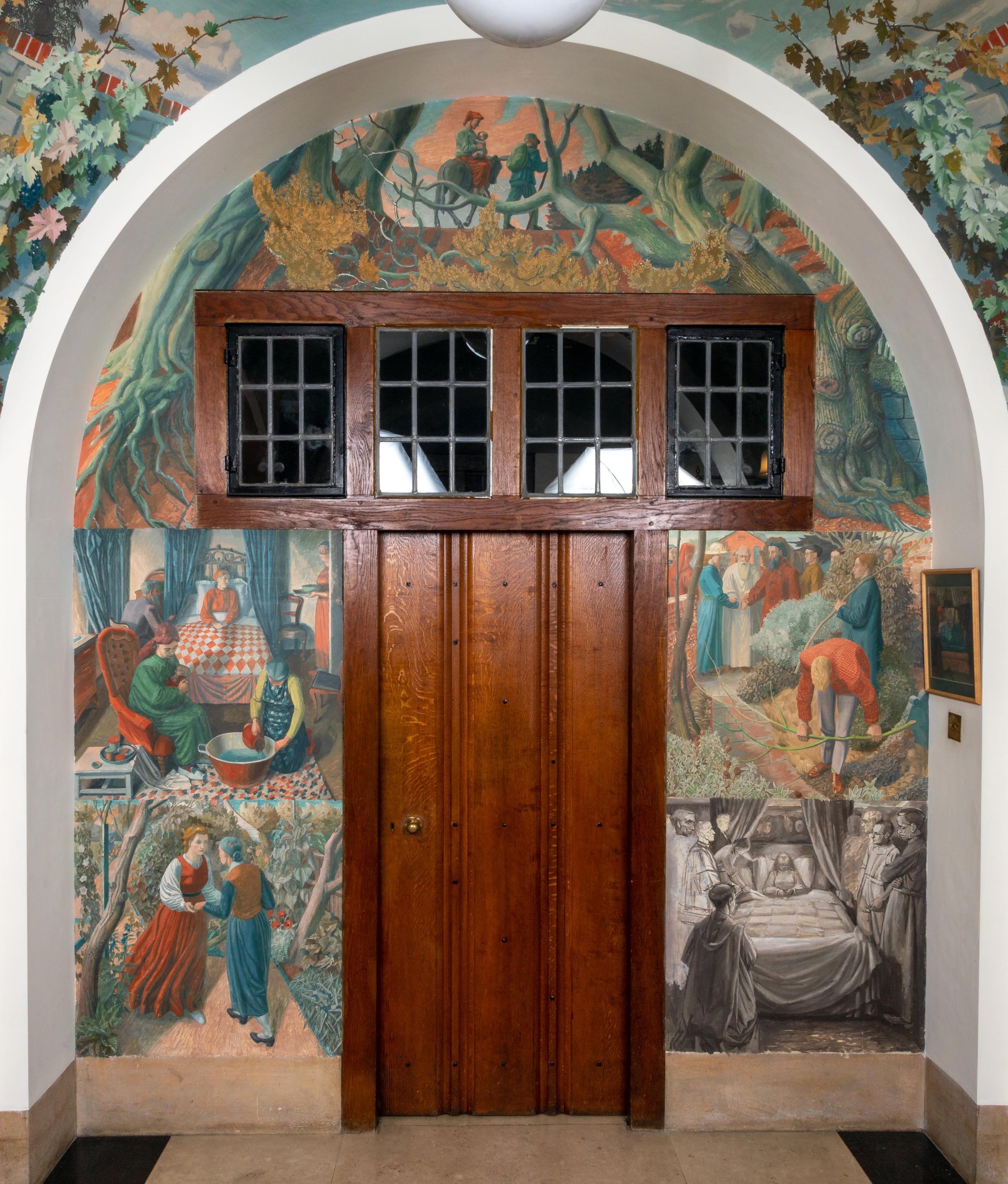 The Chapel’s wall which includes the windows above the altar (below) was chosen by Mahoney to display the Annunciation by the angel Gabriel to the young Jewish girl dressed in red, while below (incomplete) two other angels are playing xylophones; and spread across the top are illustrations of Old Testament prophetic titles which are applied to Mary in the traditional Litany of Loreto.

Finally, the ceiling of the chapel draws on Mahoney’s floral expertise to display a delightful luxuriant garden, which may portray a new Eden as the life setting for the new sinless Eve, and may also, with its surrounding wall, recall her being the ‘enclosed garden’ (hortus conclusus) beloved of God in Song 4:12, all surmounted by a radiant blue sky stretching across the ceiling’s vault. 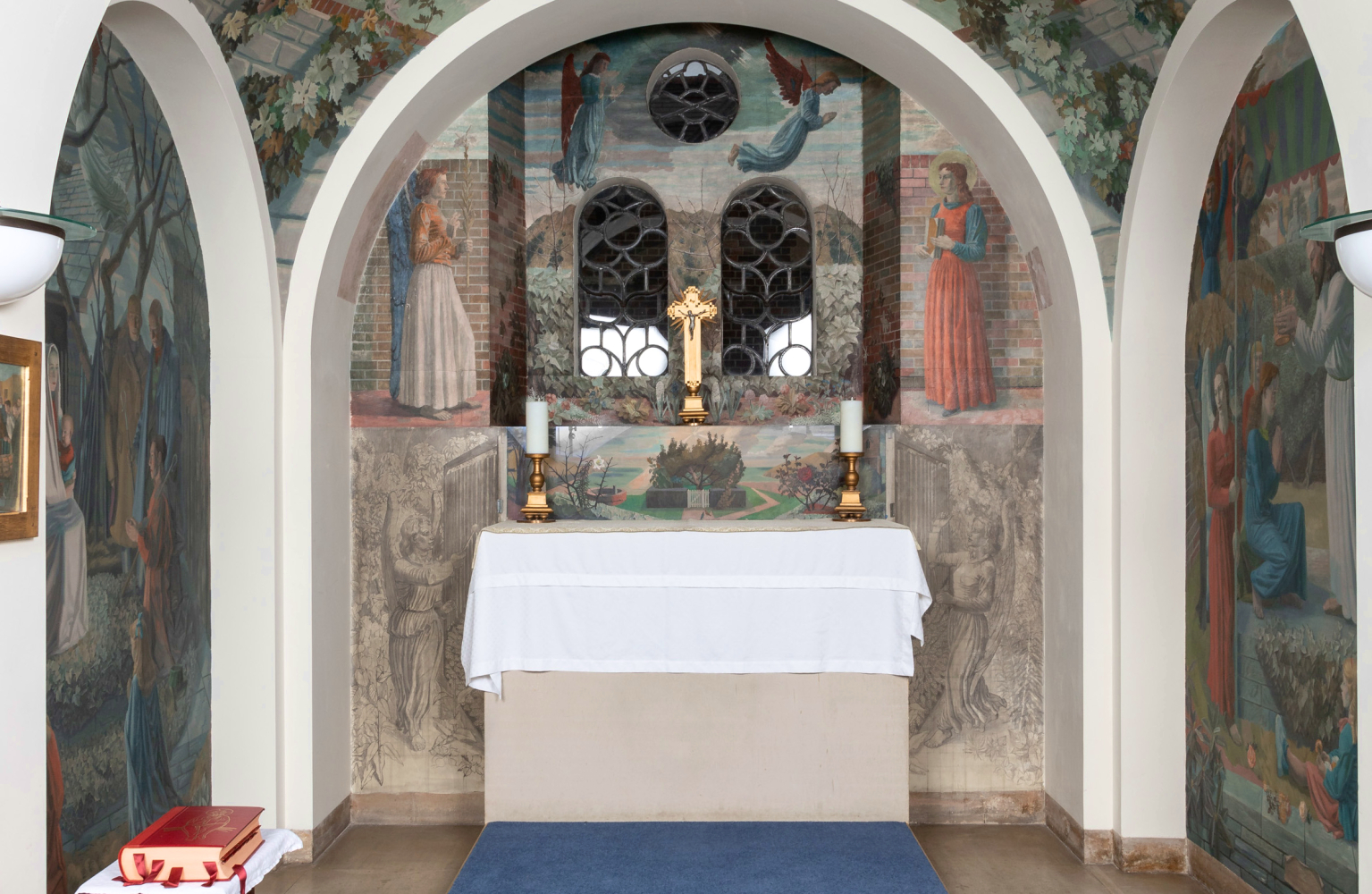 As it happened, the sensitive Mahoney’s work was left unfinished, for several possible reasons: the artist did not feel his efforts were sufficiently admired by D’Arcy after the latter ceased to be Master; or Waugh’s donated royalties grew less over the years and were proving insufficient for what was becoming a lengthy project; or the physical demands of the work were affecting Mahoney’s declining health. The consequence was that the small Dormition panel to the right of the Sacristy door (including Fathers D’Arcy, Martindale, Corbishley, the architect Lutyens and the Hall’s carpenter), and the two other panels placed immediately on either side of the altar, remained incomplete in their grey undercoating. Interestingly, this unplanned feature has produced a simple graceful effect, particularly in Mary’s deathbed, and it also serves in its unfinished condition to highlight the interplay of strong colours which pervades the work as a whole, while also evidencing the otherwise concealed patterning of fabrics and garments which underlies Mahoney’s entire work.

Not completed, and therefore never officially unveiled nor publicly launched, Charles Mahoney’s insufficiently known Lady Chapel murals in Campion Hall are nonetheless capable of making a deep impression on their viewers. They elicit admiration for the peaceful prayerful space which they create, while also being valued as a visible illustration of St Ignatius Loyola’s practice of biblical imaginative meditation. As such they remain an affectionate lasting tribute from the Campion Hall Jesuits to the mother of Jesus who is also venerated by them as the Queen of their Society.

If you would like to help the Hall in preserving the Lady Chapel panels, you can do so here.